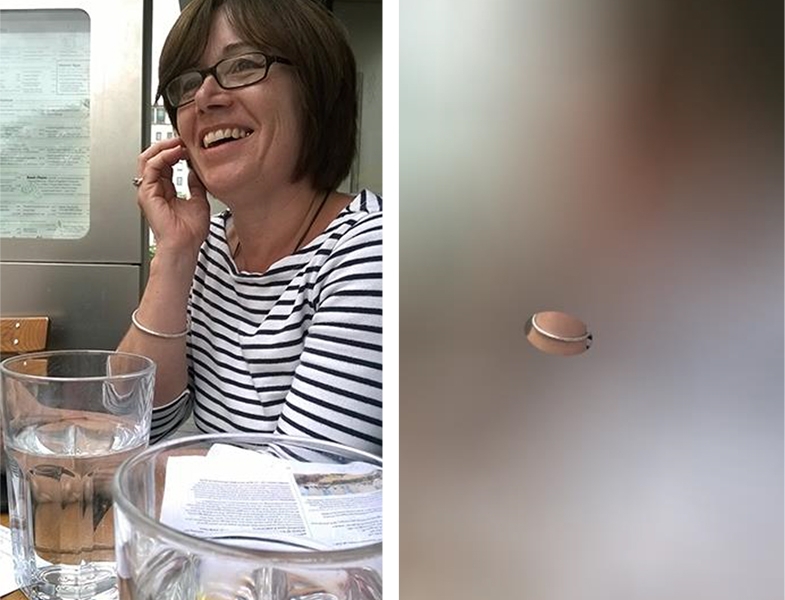 Socialising (meeting up with a friend in a cafe) Connor

Connor (CVI Classification 1) as described by his mother:

Firstly, I would never take Connor to a cafe or restaurant unless it was empty, he finds them very stressful. Connor, because of his simultanagnosia, has never been able to anchor sounds. We take for granted a knowledge of what we hear because we can see it, and learn from it, but Connor can't do this - if there is a sound he is rarely able to find it. So a waiter coming to the table to take our order or someone walking by would startle him. All the other noises like coffee machines, music playing and chatter are all very confusing, and if you don't know what they are or where they are coming from quickly become frightening.

If we pretended that this was a very quiet cafe and was known to Connor so he wasn't frightened, and focused only on what he could see, I think he would pick out the bangle because it is shiny and on the woman's arm, so is likely to move at a reasonable slow speed creating a pop out effect. I don't think Connor would notice the woman's face or even realise there was a person attached to the shiny thing. The bangle might prove interesting for a few seconds, but without any wider understanding of his surroundings, I think he would very quickly become bored and irritated.

Socialising (meeting up with a friend in a cafe) Mary

I enjoy going to cafe's or restaurants, but have to use specific strategies to help me cope with what can be quite challenging environments. It is much easier if it is a cafe that I am familiar with. Then I can use visualisation beforehand to help reduce my anxieties and think about what I will need to do to make sure I can see as much as possible. For instance, thinking about where I am sitting and what I am facing. It is important to try and face a blank wall or a less cluttered area of the cafe. It can also be hard to read the menu, especially if the writing is fancy or cluttered. Noisy cafes are generally not a good option, as it is hard to process all the visual and auditory information at the same time. If I am meeting a big group at a cafe or restaurant, I like to arrive early. This way I can build up the visual scene slowly, as opposed to trying to take in everything at the same time, which is often overwhelming.

In this particular image, I found myself quite distracted by all the glasses on the table and the visual scene in the background. This made it hard to even focus on the women sitting at the table. If I was at a cafe like this, I would find it difficult to concentrate on the person sitting opposite me and would constantly have to fight the urge to look at different visual elements in the scene. If I forced myself just to focus on the woman (which is hard to do) I would be drawn to the women's glasses and then maybe her smile.