In our previous sections, we discussed Functional Vision and considered visual acuity. Visual acuity is a technical measurement; however, the effects of reduced visual acuity are that things become more difficult to see clearly because detail is lost (please review the Technical Stuff for a more detailed explanation).

For some, including many with profound multiple disabilities, their visual acuity may be very poor, technically qualifying to be registered blind. With CVI, there is not an absence of visual information, it is just that the brain is unable to create an image inside the head that accurately replicates what is coming into our eyes. With reduced visual acuity, as our simulations show, this is because the detail is not present.

The strategy to help someone with poor visual acuity is to make things bigger. People may need a bigger text size to read comfortably for example. However, when reduced visual acuity is combined with simultanagnosia, sometimes identified as the person only being able to attend to one thing at a time, a problem is created.

Mary has mild visual acuity problems, measured as 6/24. The images below have been professionally simulated to show what 6/19 would look like, this is very close to Mary's acuity of 6/24. These pictures provide a good representation of how Mary's acuity affects how she sees. 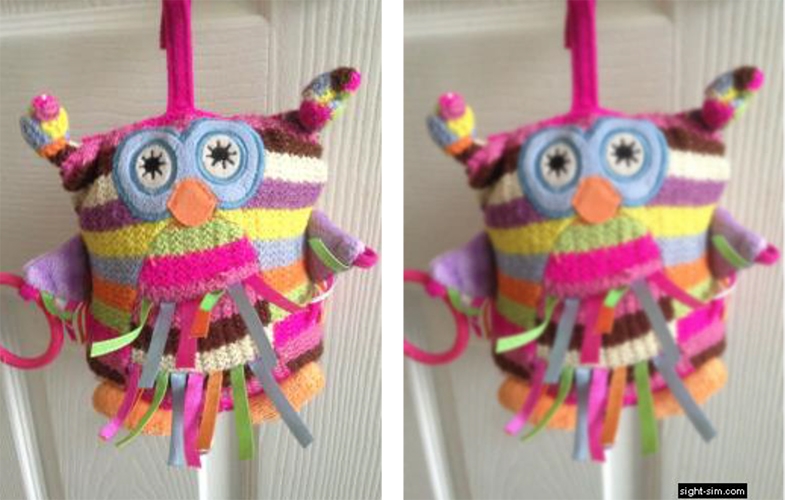 _These images (made with a beta version of SightSim software), give an approximate indication of how someone with the measured levels of vision shown sees when compared with someone with typical vision.

However, Mary also has simultanagnosia, but it wasn't diagnosed when she was at school, so the plan was to make everything bigger, but this caused difficulties, as Mary explains...

I had so much trouble at school. Because my acuity got tested at 6/24 early on, I was told that I would need to have material enlarged to be able to see it better. I was also told to sit at the front of the class so that the information on the board was bigger. However, I didn't find either of these two strategies helpful and in fact, in many ways they made life more difficult. Enlarging print didn't make it easier to see at all, but what did help was increasing the space between lines, as this helped reduce the crowding. So actually for me, normal size font with double line spacing would have been the best option. If only I had known this when it came to exams, so that I didn't have to battle for three and a half hours trying to read an A3 size exam paper with enlarged font.

Also, sitting close to the board was really difficult and all I wanted to do was pull back. But I would get in trouble if I wasn't sitting at the front, as this is where the teachers were told I should sit.

In Mary's case simultanagnosia had not been diagnosed, but even once it is diagnosed, it is often misunderstood. Connor's visual acuity is severely reduced, at 6/200 and he is registered blind (severely sight impaired). It has also been noted that Connor only attends to one thing at a time, and so the plan might be to only show him one thing at a time and make that one thing very big.

We do not have any images simulated to Connor's acuity of 6/200. The right hand photo has been simulated to show 6/120, so Connor would see considerably less detail.

Simultanagnosia is about Visual Attention, which may present as only seeing one thing at a time, but should not be understood as such.

Connor's simultanagnosia, like Mary's is severe. Connor only has a small amount of visual attention, this is not the same as only being able to attend to one thing. What Connor and Mary can't do, is zip together all the visual information around, collected in glances, to create a seamless whole; they are always limited to their level of reduced visual attention. For more information on the spectrum of simultanagnosia and many examples please visit the Simultanagnosia Spectrum sections.

For Connor, if you make things big enough for the detail to be visually identifiable, it has to be made very big. However, by making something very big, Connor's reduced visual attention means that he can only see a small part of it.

We invested in this massive television, thinking everything had to be huge, but Connor loved nothing more than watching his programmes on my iPhone or his iPad. I didn't understand it, it made no sense, but then I began to realise that somehow smaller made more sense to him. We got him a computer, again with a big screen, but realised he liked playing his computer games on the reduced screen. When I put the full screen on he became agitated, but when we reduced the area of the screen (as with the picture below) he focused and calmly played. 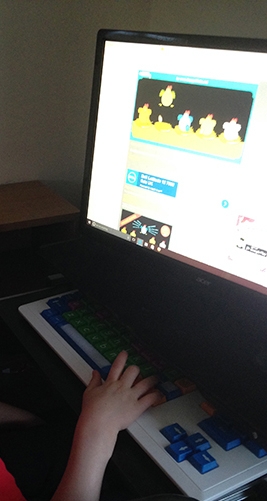 Even though Connor can't identify the chickens in the game, by playing on a reduced screen he is able to visually attend to the whole game and experience the movement and sounds.

Greta also has simultanagnosia but does not have any visual acuity problems, however likes to watch films on 'thumbnails', which create visual acuity issues because detail is lost when watching a film on such a small setting.

Greta has started being really interested in watching a group of old films and videos of herself that I have saved on my computer. I've noticed though that she doesn't usually open up the file, but prefers to just play the thumbnail picture (in which you can now play the video inside). It is literally just slightly bigger in size than a postage stamp and she'll watch the whole lot of them this way. I know it is a way of not losing your place in the folder of videos, but she also seems to prefer to look at them at this size. I was thinking that is so odd but maybe there's something to that idea that smaller is better sometimes?"

For people like Connor, there is a particular challenge. Due to his combined poor visual acuity and simultanagnosia, it is not possible for him to create visual representations in his brain that look like the real representation. Make something big enough to allow for the reduced acuity, and it is too big due to the simultanagnosia, make it smaller to cater for the simultanagnosia, and it is less clear. This is important to know about people like Connor, who need to learn other ways to identify and recognise things. Connor's mother explains how she is teaching Connor to understand what a horse is, knowing that he will never be able to visually match what a horse looks like with an image created in his brain.

Understanding what a horse is, is the first attempt at teaching Connor how to attribute multiple experiences to one thing, and in turn develop a better informed more complex (right temporal) knowledge. I started with one word, and one experience. The word was simply 'horse' but said very slowly and extending the consonants. I am teaching Connor to talk but it is very early days, however he has been extremely responsive. The word has to easily be connected with the action or experience. The word also has to be identifiable. Connor's processing is slow, so speaking at normal speed is too fast. Most people extend the vowels when speaking slowly, so horse would become hooooooooooorse, which to Connor would be ooooooooooo. Normally when I introduce a new word to Connor it connects with something he already understands, a clap or a bubble for example. With horse, I was taking the next step in introducing a new word with a new experience, which would be challenging. I extended the consonants - the easiest way I have found is just to say the word very slowly without the vowels - it sounds odd but Connor can really connect. hhhhhhhhrrrrrrrrrrrsssssssssss. For some reason I said it with a strong West Country accent! I think I just wanted to word to stand out.

Connor's understanding of the word 'horse' is key. In addition to his weekly riding sessions horses feature in many other places, including:

I linked these to the word 'horse', and in his own time, Connor has started to join the dots, and seeks out horse things. If there is a horse sound he is drawn to it, and he recognises the movement of horses.

Guided by Connor and his interests, we are using a similar approach to 'cloak' the words 'monkey' and 'train'.

Connor's understanding of what a horse is combines:

These are Connor's parameters - the only useful visual tool Connor has for recognition, is that of movement*.

Connor will never be able to recognise a picture of a horse as a horse, because of his combined poor visual acuity and simultanagnosia. Would anyone argue that Connor does not know what a horse is however?

Connor's mother is using a planned approach, to teach him about the world around him within the parameters of his learning.

* Whilst Connor's vision could never be used to recognise what things look like, that does not mean it cannot be used for recognition. Connor recognises his mother by the teal blue cardigans and scarfs she wears for example. That isn't what she looks like, but it helps Connor find her.