Here is our simultanagnosia spectrum mixer-board: 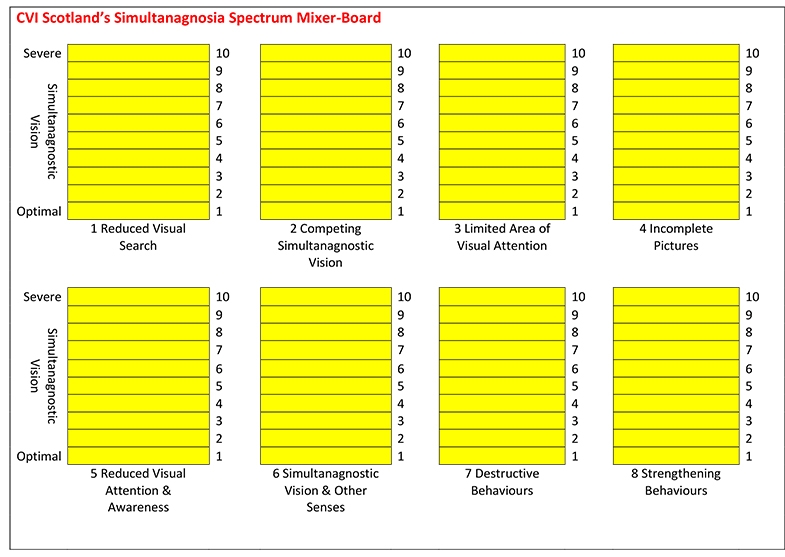 Each numbered column corresponds to the previous numbered subsection. Note, Strengthening Behaviours (8) is scored so that a low level is optimal, to keep it consistent with the other seven areas.

To demonstrate its use, let us re-visit Mary in the audience from a previous sub-section (1. Reduced Visual Search)

The first time Mary truly understood the extent of her simultanagnosia was when it was being demonstrated to a large audience. Mary was sitting at the front of the room and was asked to glance up at the audience and say how many people she saw. To her surprise, only one face was clear, the rest of the scene around this person was simply not there - it wasn't black, just didn't exist. She then looked down, before glancing back up again. This time she saw another face, but not the face that she had seen the first time and she had no idea where this new face was in relation to the first face she saw.

Considering this statement in relation to each of the eight areas affecting simultanagnostic vision, we note (each number related to the numbered column):

Now we try to plot this on the mixer board: 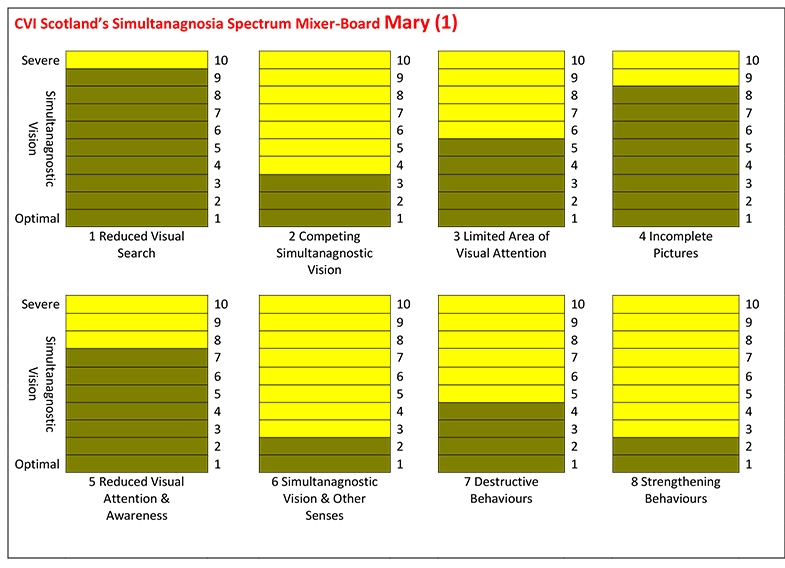 We know this is not scientific, but it is remarkably helpful in learning to understand Mary's challenges, as we see what happens to Mary's mixer-board as she becomes anxious...

By this stage, Mary was feeling very anxious, as she knew that there were lots of people in the room, but she just couldn't find them. Every time she glanced away from the audience or switched her gaze around the room, only one face would come into focus and she couldn't work out exactly how many people she was sitting in front of. She also knew that she had a friend in the audience and thought she knew exactly where he was sitting, as she had been sitting with him just moments before. But when she tried to find him, her glances became panicked and she was not able to direct her gaze to where she wanted it to go. Her gaze kept getting drawn to faces that for some reason her brain found interesting, even though she wasn't sure why she was being drawn to look at them. The more panicked she became, the less she was able to focus on until she got to the point where it was easier not to look at the scene at all and just averted her eyes. She also found it stressful when someone from the audience asked her question. Although she could clearly hear the man's voice, she had no idea where he was in the room and wasn't able to direct her answer to him. From this experience, Mary started to understand why, for the first time since her brain injury 17 years earlier, she found crowded situations so hard.

So we plot the new levels, with the impact of added stress, on Mary's mixer-board again 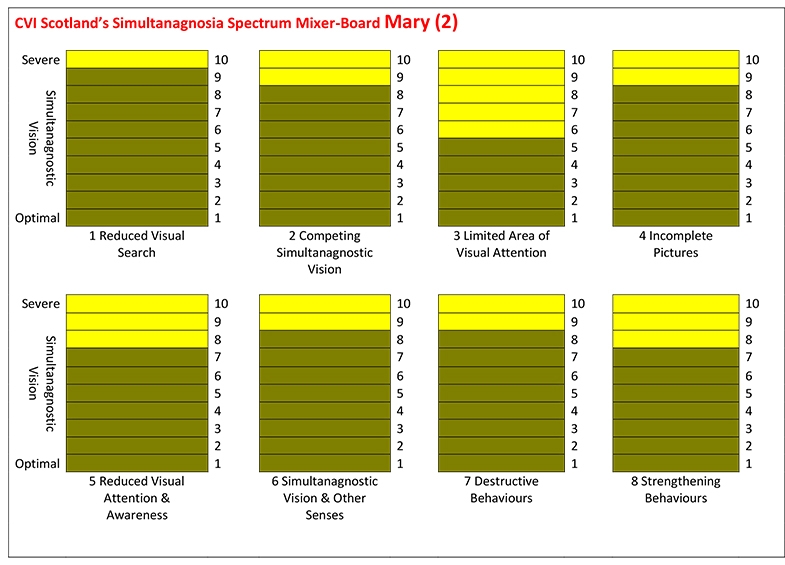 Let us compare the two mixer-boards and see what they tell us about Mary's simultanagnostic vision and the impact of stress.

Even without the added element of stress, the environment wasn't optimal, Mary was facing a crowded audience. When following instructions Mary realised she was only able to see one person, and when looking again could still only see one person, but it was a different person. Mary was unable to form a complete picture of the audience and was visually unaware anyone other than the person she was looking at was there.

This tells us the areas of simultanagnostic vision Mary is most severely affected by. We know that in an optimal environment, for example at home with her family, Mary's visual search is much better, however this is because things are in known places (relying on memory, not visual search) and when calm, Mary can use self-taught searching strategies.

At home Mary can form complete pictures, again with the help of her memory, but also strategies to put things together.

Mary's visual attentional field was around the size of a person's head from a distance of a few meters. This does not improve for Mary, however it can deteriorate.

As Mary becomes stressed the competing nature of her simultanagnosia becomes more of a problem. Mary realises she can't find her friend, and the search is now doubly difficult. 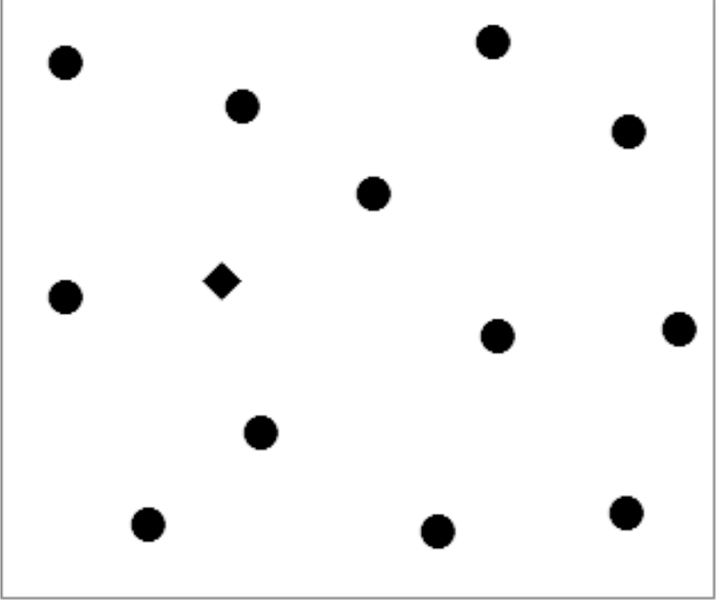 If Mary's friend is the top left circle, previously she just had to look for long enough and eventually, due to the laws of probability, she would have found him. Now, her vision is being drawn to the diamond, making what was already a relatively random search even harder, to the point where it is not possible.