It is a common misconception that any colour is intrinsically more visible than another. There is no evidence to support this. The table below shows three primary colours on a white and black background. One may be more appealing due to a preference, but that is not the same as the colour in itself being somehow more 'visible'. Preference is a choice or behaviour related to the individual's experiences, it has nothing to do with any colour in itself. 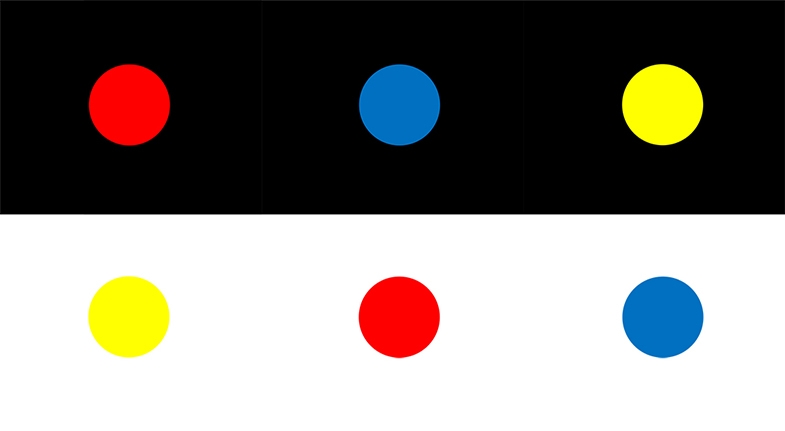 Louise Buggy, teacher of the visually impaired and CVI Scotland Trustee shares her experiences around the importance of colour:

My experience is that colour plays an interesting part in the developmental journey of children with CVI and complex additional support needs. This is a purely observational opinion, formed over many years of working alongside such children/young people and their families.

One child, Julie, cerebral visual impairments related to occipital injury, severe hearing loss and a complex learning disability. At the age of 5 she was often very distressed and isolated and at this stage her hearing loss had not been diagnosed. She was happiest on a resonance board or lying on a big drum feeling the rhythm and vibration. During a play activity on the resonance board we covered Julie in a huge piece of yellow silky material. She loved it and following games of pulling it off her head she spent long periods of time putting the material up very close to her eyes and became very excited. Julie sought out the same material again and again and began to find and explore other yellow things in the environment - possibly expecting them to be the piece of material. We also presented simple coloured shapes on a light box and Julie similarly became very excited, clapping and picking up the yellow shapes each time. Her family bought her a yellow coat and she enjoyed the independence of identifying her own coat on the pegs and attempting to put it on. Once her hearing loss was diagnosed, as she began to use on-body signs and attempt to make sounds, one of her first words was an approximation of 'yellow'. Clearly there was an awful lot going on for Julie during this period of development and many factors at play. Her joy at developing expressive communication was incredible and she went on to use a very effective combination of sign and speech. She eventually learned all of her colours and shapes and was able to recognise simplified symbols for reading and producing sentences on the computer. The use of the colour yellow was very significant for Julie in those early days and although it is hard to say exactly why she was so drawn to it - perhaps familiarity, perhaps emotional attachment, perhaps simple preference - the important factor is that it was observed by those around her and acted upon as a tool for development.

About one in twelve boys / men are less able than others to tell red from green. This is important to bear in mind. There is some evidence that some people with CVI are less able to tell the difference between colours than others.

The commonest reason for children to appear to be unable to tell colours is because they can't name them. Words like red and blue are abstract. This is difficult to learn when one is little, or if one has learning difficulties. Using an appropriate noun for a few weeks, such as sky blue or grass green works well.