So, if we imagine that Amelia is having a lovely walk through the woods on this path 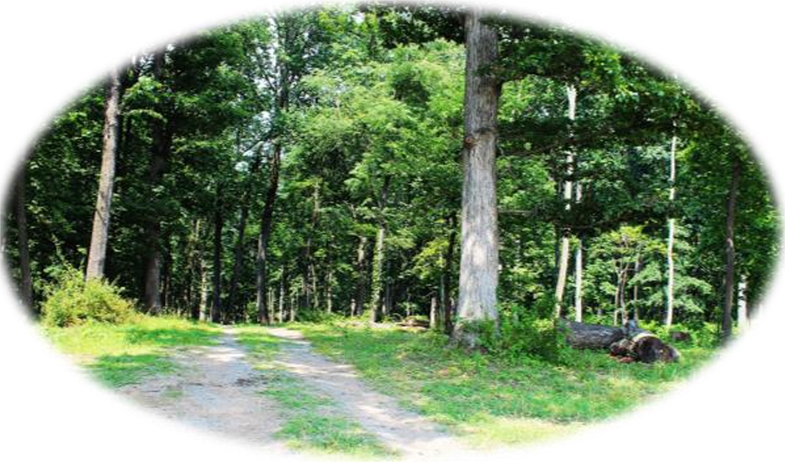 We must factor both Amelia's lower visual field impairment and her left hemi-inattention, as suggested on the image below 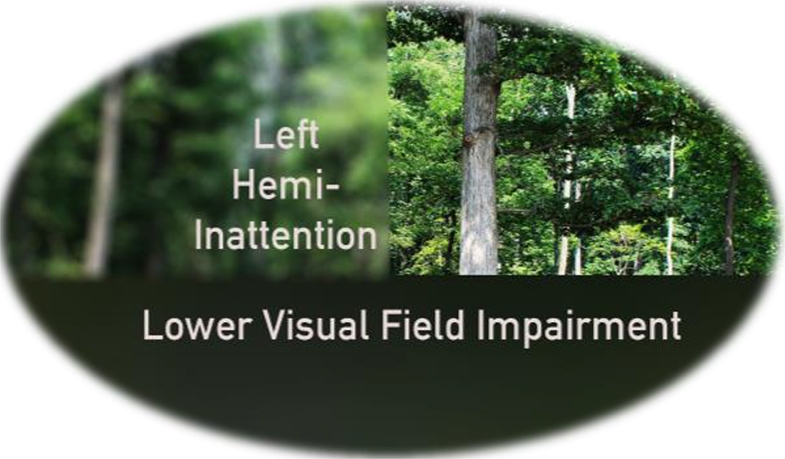 In the lower visual field, Amelia consistently shows no awareness (which is why we have suggested she has possible additional neglect in this area). To her left however, when Amelia rotates her body to her left, she is able to see into her left visual field. Shifting her body position moves her visual awareness.

We have blurred the left side to show it differently from the lower visual field which does not exist for Amelia, however when Amelia has limited visual awareness to the left of the midline of her body, it means she will miss things on her left.

To walk, Amelia has to juggle balance issues from her cerebellar challenges, tripping over things from her lower visual field impairment, and missing things on her left due to her hemi-inattention, as her mother explains:

Amelia's walking is to her right. If Amelia is walking in a straight line (almost impossible) she will veer to the right and self-correct when she bumps into something. Amelia's gait is wide on standing & walking and her head must tilt to balance. Her cerebellar issues affects her balance but to compensate for this, the gait has to change and the head tilts to compensate for vision.

Running is the easiest.

Standing is ok to a point (but she must find her balance).

If we look at this image again we can see there is one clear area of optimal vision for Amelia, in her mid to upper right visual field. If Amelia is at school or trying to focus, it should always be recognised and understood that Amelia will see most clearly within this area.

Amelia also has dorsal stream dysfunction. Amelia finds searching for things in cluttered environments difficult, and her guidance of reach is poor, so she sometimes misses things and knocks things over. Looking again at the image of Amelia's walk in the woods - in her mid and upper right visual fields Amelia is still affected by reduced guidance of reach and reduced visual attention, but considerably less so than in her lower and left visual field. This extends to Amelia's hearing, and she may not be able to locate sounds coming from the area of her lower left visual field, which may be confusing, and at times frightening (see Further Suggestions, below).

Putting all of this together, in class at school, Amelia needs to sit on the left side (from her perspective), so that the teacher and the board are in her strongest right side. Amelia would benefit from a class with little visual clutter and should have a clear view of the teacher and white board (without anyone sitting directly in front of her). With these small adaptations, and the extra processing time we have already discussed, Amelia will be able to work much more effectively.

When climbing up the frame, having had the time to process and plan, Amelia's mother reflected "the speed she went up that frame was planned & calculated". We know that Amelia has no fear of climbing, but it would have still required concentration and skill. Whilst climbing, Amelia seemed to have virtually no visual awareness, she had planned exactly what she was going to do, and quite probably could have ascended the frame with her eyes closed. At the top, with an open view with no clutter and no stress, Amelia could see.

Later I asked Amelia "what did you see up there?". Her reply knocked me back, she said, "I was left until last again, no one thought I could do it, so I wanted to prove everyone wrong and I put all my power into my body and climbed, I didn't see anything but when I reached the top, I saw everything".

We know from Amelia's mother that Amelia loves open landscapes, she told us "she becomes a different child in open spaces". This is something we regularly come across with children who have reduced visual attention due to presumed simultanagnostic vision. When Amelia is at the top and feels her sense of release, the combination of

Often, where a child has several different factors affecting vision, they are looked at separately. Amelia's Great Climb shows us how they only make sense in relation to the child when they are considered all together, affecting Amelia simultaneously all the time.

As we learn more about Amelia, we learn that while she faces many challenges due her visual challenges, with understanding it is easy to create an environment to learn within, which for Amelia would make the difference between optimal learning, and at times, the impossibility of learning.