Sense of Protection
In the protective shields section of the website, parents reported that their children appear to feel physically protected and more relaxed when in, for example, wheelchairs with large trays in front. It is possible that horses provide this same sense of physical protection - there is a horse's head and neck between them and any potential obstacles, and being high up means that obstacles are fewer.

The movement may help some children see more
As outlined in the movement section of the website, moving "in the same direction as people, at the same pace, is as if no one is moving around you and you can see the people clearly".

There are also some children whose vision is enhanced by movement. They may even rock to generate a sense of vision. For these children being on a moving horse may generate gentle movement of the peripheral visual scene, making it more apparent.

Less visual information for the brain to process
Horse riding is thought to be of particular benefit to people with dorsal stream dysfunction (simultanagnostic vision, optic ataxia, apraxia of gaze). A lot of visual 'clutter' (people, signs, cars, posters in classrooms, adverts... the list is endless) tends to be at eye level or below - to attract our attention. Such cluttered environments are difficult for those with dorsal stream dysfunction. Sitting high up on a horse, raises your eye level above this clutter. There is less to see; less visual information for your brain to process. This frees up 'space' for your brain to focus on other things e.g. relaxing and balancing. 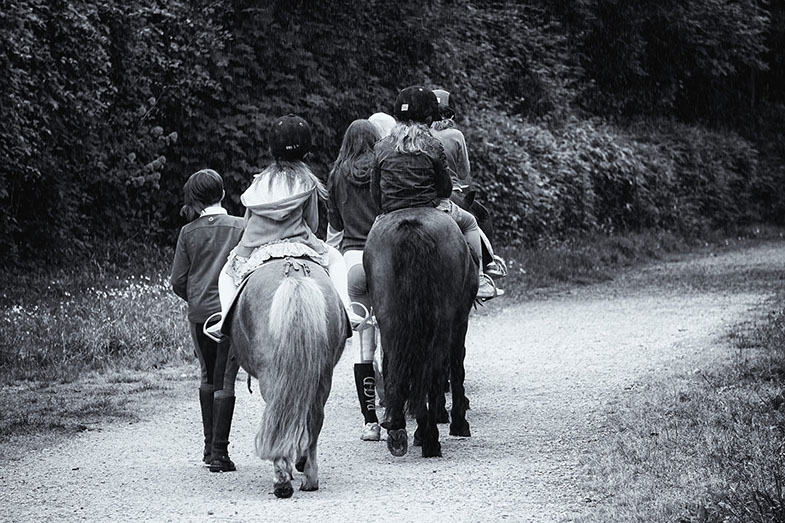 The horse does the navigating for you.

Parental accounts of the benefits

These are a few accounts from parents of children who have lower visual field impairment and a form of dorsal stream dysfunction, in combination with other additional needs:

"When she's on a horse, she appears to have so much less stress. She has a smile from ear to ear, but what's more noticeable is her eyes, she no longer looks like she's in fight or flight mode, which is what I witness most of the time when she is on the ground! She responds to instructions so well (first time, rather than the usual 5-6 times), knows her left from right when on a horse, but gets confused when she isn't."

Here, the brain isn't in overdrive trying to decode visual information, she's more relaxed and has more resources free to apply to other things, such as language processing (listening to instructions, decoding what they mean, and acting on these instructions). She also has more resources available to use for left/right discrimination. Knowing left from right depends not only on language processing, but on visual-spatial discrimination skills (locating where objects are in space) (Gormley, Dempster and Best, 2008). Reducing the need to use her visual system to avoid upcoming obstacles, may allow her to better use it for other functions - such as left/right discrimination.

A first encounter with riding: "We arrive and he is not happy. Entering the arena, he lies down on the floor, the absolute demonstration that it is all too much for him. I put him on the horse (thinking that even just to sit there for a few seconds is a start) and start singing 'twinkle twinkle', everyone joins in and he is immediately calmer. As soon as the horse started walking it was like he was under a spell. All the stresses and anxiety described above disappeared. It was quite overwhelming, we don't get many moments like this. .... He was beautifully balanced and stayed completely upright throughout. ... When it was time to go, he was refusing to come off the horse."

Less visual 'stresses' + horse navigating for him + sense of protection = more 'space' to focus on balance and relaxing.

Here, a parent shows persistence. Of course, not all activities are right for all children - additional needs or not. Indeed, during research one parent commented that their child did not enjoy horse riding and they had stopped lessons - they did not like going fast. The following account describes the same child as above, who initially refused to get on the horse the first session, several months on...

I have just been told that the stables want my son to ride without support, previously two people held him either side whilst a third guided the horse. They think my son has sufficient balance and control after several months of lessons, but when there is support provided he leans into it. They will still be at his side, just not holding him. It reminded me of letting one of my other children go off on their bike for the first time, letting go. This is about independence, he has done so well, I realise that he is ready for this next step, it is me who has to let go...deep breath!

If this parent had not persisted and put their child on a horse, they'd have never seen the "overwhelming" transformation in their child.

Benefits of riding for people with disabilities, including but not limited to CVI

The following are benefits of riding for people with disabilities that are widely reported (for example, by Riding for the Disabled Association (RDA), but we too have found similar benefits when talking with parents of children with CVI.

When someone rides a horse, their body moves in the same way as it would if they were walking. A horse's body temperature is also about 5 degrees higher than a person's.

These two facts combined can help to:

One parent reported: "She had no core strength prior to riding and would not cross her midline, these are no longer an issue for her. Part of her lesson is riding with her arms on her head, out to the side etc, to improve her balance and moving hoops from one post, across her midline to another post. So it does provide therapy too.


Another parent noted: "Riding helped him immensely, to the extent that his scoliosis stopped progressing and he is no longer under review. His walking improved and his posture. His physiotherapist was really pleased with it."

A parent told us: "The core strength aspect has been vital for my youngest. The psychological aspects and social benefits are definitely paramount though." 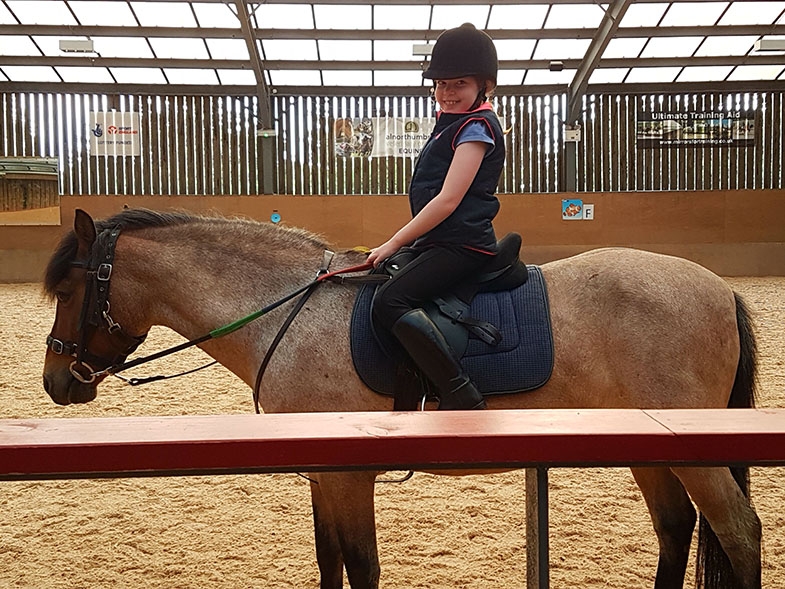 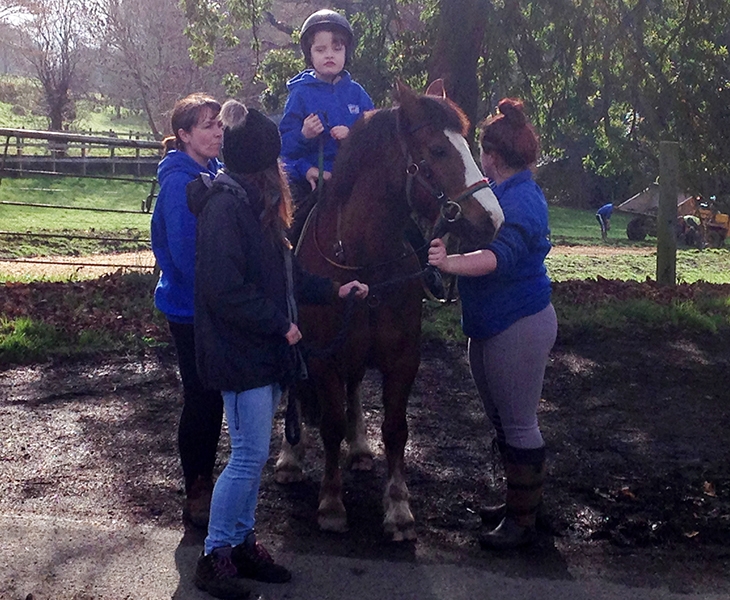 Some research by RDA

Over 12 weeks, a study of 181 school aged riders found that:

Carriage Driving: Something else to consider

While every effort is made to ensure everyone can access riding, some cannot.

Whilst carriage driving, you sit on a wheeled carriage attached to the back of the horse and ride round a course.

It provides similar benefits to horse riding such as:

We've been (carriage) driving for about six and a half years and riding for maybe five and a half. It completely changed my eldest son's life. He was outwith education as they couldn't meet his needs locally. He didn't speak to anyone. He had terrible behavioural problems and was the saddest little boy in the world. Extreme mental health problems and hated himself. The carriage driving changed all that. This was the specialist team. They were so patient and he achieved little successes bit by bit. After a year he spoke to them for the first time! We all cried that day. It's been the only thing he's ever been good at. And is good at. He often drives mainstream now as well as with his para-team. He's made lots of friends on both circuits (whereas he has a grand total of zero friends at school). It taught him, when no one else could, that he wasn't worthless and he could be good at something. 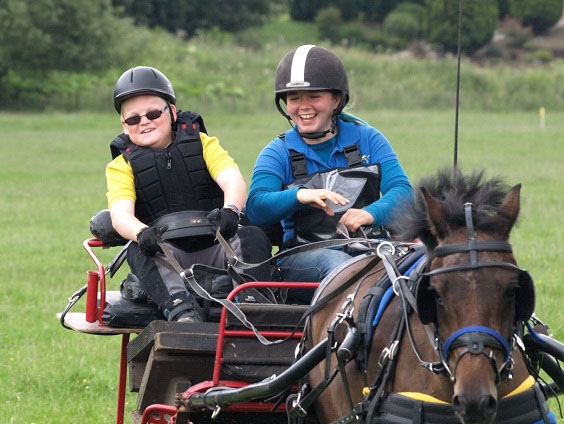 Photo that a parent has sent us of their child with CVI enjoying carriage driving.

We received feedback from another parent, showing that through horse-riding her son has the opportunity to learn further skills, including language development and empathy:

I came across a local group who practice The Horse Boy Method. It is a holistic approach to horse riding for children (and adults) who have difficulty following formal horse riding instruction or who have a mistrust of people. The programme is designed to benefit children physically and improve cognitive and sensory, emotional, social and psychological development.


Please note, Daniel attends a specialist centre. We encourage all people to check any facility and ensure they are licensed, regulated, insured and both approved and experienced working with children who may have additional needs (see the next section, Horse Riding Guide for Parents).

Daniel is clearly highly motivated under these circumstances, and under these conditions there is the potential to bring about learning in other areas.

Children who are content, happy and motivated whilst engaged in a pursuit that they love have the potential to learn a wide range of associated skills owing to their engagement.

Daniel is developing an understanding of language which in turn is facilitating these great strides in his emotional development and his understanding of the world around him. Daniel can only attend to one thing at a time, and it might be worth using clear singular words to complement or add to his experiences immediately after they have happened, to help further language development whilst he is so motivated.

The words need to be clear, directly related to the experience, consistent, and repeated over and again within the context of his enjoyable experience.

Another issue is the development of Daniel's theory of mind. We know that Daniel can truly engage with his parents when content. Daniel's developing love for horse riding and no doubt for the horses themselves may well contribute to extension of Daniel's capacity to understand and see through the eyes of others.