We all can all remember an experience that has frightened us. Maybe it was a big spider or someone jumping out at you as a prank. Your reaction may have been to jump or scream. That reaction happened because your brain automatically released powerful chemicals into your body because it thought you were going to get hurt. The chemicals gave you a quick shot to make you stronger and faster, commonly referred to as fight or flight. The example of the spider and someone jumping out are two different types of fright. The spider (for those frightened of spiders) might just have been sitting on a wall not moving. Unless it's a poisonous spider it's not actually a risk to you. Your fear of the spider has been learnt. Someone jumping out at you is an instinctive fear but the brain's chemical process as a reaction is the same for both.

These can include the common fear of spiders, to fear of frogs, clowns, water, thunder, enclosed spaces, open spaces... almost anything. You might not know or remember where it came from, but sometime in the past this fear has been learnt. This is important to understand for your child with CVI, as some fears may seem completely irrational. It could even be your child appears to be only pretending to be frightened because they don't want to do something. We will explain this from the child's perspective.

Your brain comes pre-programmed to protect you from harm, and operates a sort of radar system around you, constantly surveying your surroundings for threat - you are not aware it is doing this for you until, for example, someone jumps out at you. Your surveillance system will register anything moving fast towards you, and will pick it up from its visual movement, as well as how far away sounds are thought to be.

Some fears can lead to behaviours that may appear obsessive. If some of the descriptions below seem familiar, please take a few minutes to also look at the following page (Obsessive).

With CVI, we know children can often appear frightened, even when there is no obvious cause. At the bottom of this page is a passage from a talk a mother of a child with CVI gave, explaining a nice quiet walk along a suburban street with her infant who has CVI, when suddenly for no reason her child started screaming so loudly she though he must need an ambulance - but there was nothing there and nothing wrong. Incorrect! From the child's perspective, there was very definitely something there, and something terrifyingly wrong.

You may have seen these extreme reactions in your child.

Some invisible force has created terror.

Invisible to you, does not mean it is not there for the child.

When looking at why a non-verbal child with CVI becomes frightened we need to look at what your child's brain is doing.

There are three cerebral visual impairments, common in non-verbal children with CVI, that can cause frights:

What about all three combined, as is the case for many?

Imagine a jogger in the park coming towards you and your child. You see them, they are just jogging, you can see there is plenty of space, it is calm and quiet as you know your child likes it to be. To your child, the jogger may not be visible in the distance, but as they get closer your child may feel they have become uncomfortably close, so close that they're going to collide, because to your child, the jogger is going super-fast. Your child's brain has calculated that this is going to really hurt and has prepared your child, who may start to scream, or go into a ball (to protect themselves) and become extremely distressed, for a crisis - just a jogger in a quiet park. We described this in more detail in a page called Looming, link below. 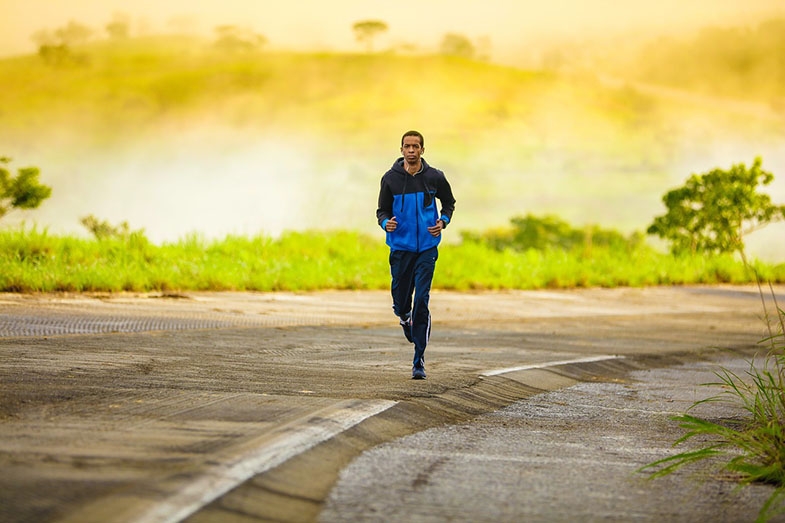 A lone jogger coming towards your child and yourself, in a lovely quiet park with lots of space. What could be frightening about that?

Another issue can add to the frights...

So, mindful of the above, here are a few general suggestions:

Explained from your child's point of view...

Am I sometimes, often or always:

Frightened of some People?

In addition to the above, we have heard repeated accounts of the following situations that non-verbal children with CVI are frightened of:

Sleep
Anything that means that the fight or flight reflex is regularly activated, as is the case here, can leave your child feeling physically very tired, and possibly a bit lethargic. They then need rest and sleep.

This is part of a talk given by a parent at the CVI Society Convention 2018, which has been edited for this page. For the full original transcript click here (excerpt from text after slide 24).

...I used to push my son along the quiet back streets from the town centre back to my house. Suddenly, he'd start screaming - and I'd be looking around for something, but there was nothing, so I convinced myself something awful must be happening in his brain and went to the doctor with that concern many times. Here's what I now think had happened...

Walking along, all quiet, a car approaches, not a loud motorbike - I'd have picked that up at the time - just a car, approaching a turning - it slows down, where it suddenly becomes visible, moving, at what to me would be a snail's pace but to my son, who processes movement and speed differently, is probably approaching at lightning speed. It had come out of nowhere and was almost certainly going to kill him - that is what his brain had calculated, and had sent all the relevant signals - imagine right now, an engine part has fallen off of a passing aeroplane and crashes through the ceiling - this is not about conscious calculated responses, this is about brain reactions - and then imagine the confusion, having braced yourself for certain death...and imagine that happening repeatedly, sometimes daily - so you resist going out, going anywhere new...