8a - CVI and Recognition Introduction

This lesson follows on from lesson 3i Visual Recognition, and before that lesson 2h Recognition, please review these lessons if necessary.

CVI affects the recognition process in many different ways. But what does it mean to recognise something (as discussed in lesson 2h), and why is recognition so important? 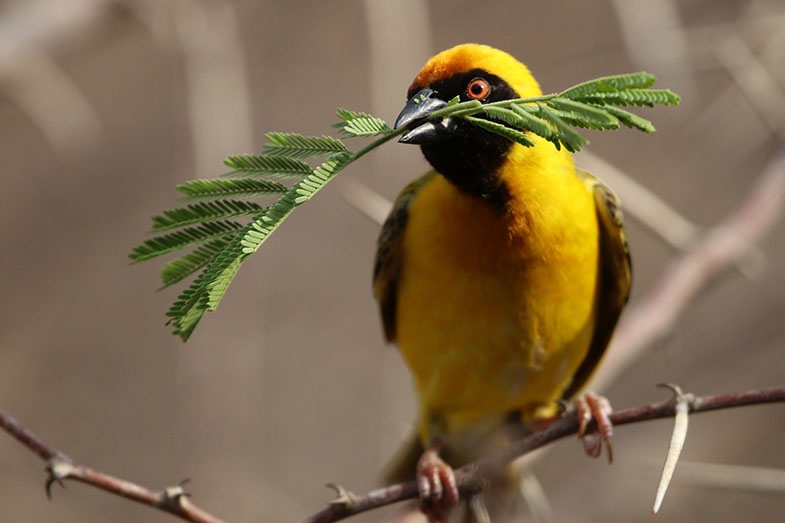 What do you recognise?

In the above picture we have a bird on a branch, holding some foliage in its beak.

The answer is not.

Seeing and recognising are different, but they work together for visual recognition. In all of these sections we are looking specifically at visual recognition, as things can be recognised in many other ways, including by sound, by smells and by touch.

So, looking at our picture of a bird, what sort of bird is it? A few might know, but for many, you can see the bird, but may not recognise the type of bird (details at the bottom of the page for those interested). 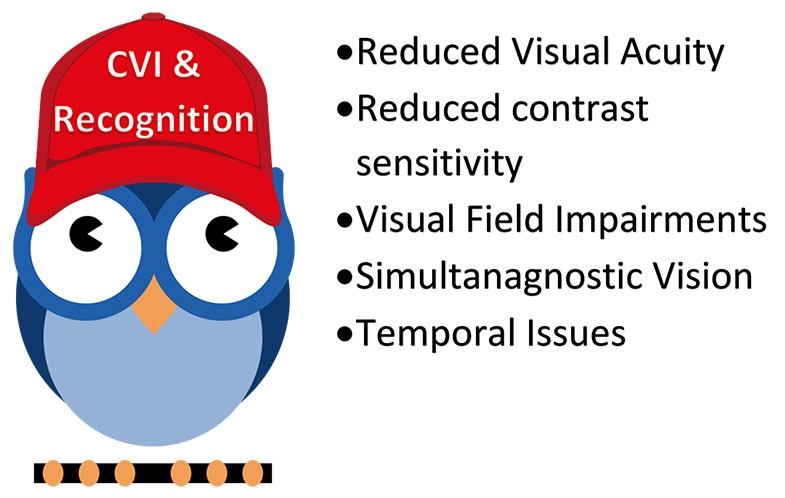 All of the above CVIs have been explained in previous lessons, please review if needed.

We introduced the ventral stream in lesson 3j Visual Pathways.

Images of the left side of the brain with the locations of the dorsal and ventral streams.

That is also the case when dorsal stream dysfunctions (lessons 3f, 3g, 7b, 7c and 7d) alter how much is seen.

But what about where the issue relates to the way the temporal lobes are working, and the person has typically processing occipital and posterior parietal lobes? A right temporal lobe lesion, caused by a stroke or white matter damage perhaps due to premature birth, might cause difficulties visually recognising some things but not others.

Temporal lobe damage can affect visual recognition, if there is no store of faces for example, then people can't be recognised visually by their faces, and facial expressions may not be recognised nor understood. For some it may not be easy to recognise shapes or objects, or letters or numbers. Every person affected has their unique pattern of impairments of recognition.

Dyslexia is recognised as having many causes, including visual impairments, and including CVIs. CVIs can create reading and writing difficulties and we will explain these. The literacy challenges that come under the dyslexia umbrella, are not considered CVIs. There are many internet resources for more information, and a link at the bottom of this page for a further explanation if interested.

Prosopagnosia is a condition, affecting nearly 3% of the population, where a person can see a face very clearly, down to being able to count freckles or eye lashes, but they are unable to match who they are looking at with a face in their memory of faces (probably in their right temporal lobe). This is not a memory problem. Research has shown that this part of their brain is processing typically, so it would seem to be a 'matching' issue, where the brain is not able to put two things together (a face in the mind and a face the person is looking at) and match them as the same (see lesson 2h).

We know of children with autism who have considerable ongoing issues with their vision that are not caused by any CVIs (following assessments). Visual difficulties in autism have been well reported, and create unquestionable obstacles and difficulties for the person. Children with autism have also been found to have dorsal stream dysfunction, which could account for some or all of their challenges. Other examples are where things are not recognised because they have either not been learnt or not been seen due to frontal attentional issues.

With all of these non-CVI difficulties (above) we agree that they can be visual and originate from the brain.

Cerebral visual impairments have particular medical definitions, although our understanding is evolving. For these lessons we are only able to focus on areas that currently come under the CVI umbrella, and not those outside of it. For this reason, we will not be covering any of these areas in the following lessons.

Where something is not seen clearly enough, understanding how the person's CVI affects their visual experiences should mean that either changes can be made to help optimise the visibility of the experiences, or alternative ways of accessing the information can be used, for example by giving spoken explanations, or by providing the opportunity to explore through touch. This requires thought and planning, as well as detailed understanding of the individual's disabilities and needs. All of these lessons show that we know this is not a straight forward process. But...simply understanding how the person with CVI visually experiences their world in a different way to others is not enough, this is just one element needed to enable them to gain an understanding.

Where something is not known, it is more complicated.

CVI alters the learning experience (as we explained in Level 2). Here's one example how:

Can a child recognise a hairbrush? This is a simple enough test, if the hairbrush can be recognised then the child can simply point to it.

But this can be far from simple for a child with CVI.

Let us assume all three images are clearly visible to the child and the child has been given enough time look at them, and to think about the question.

The child would have had their hair brushed, but would anyone have taken the time to show them the hair brush, and teach them 'this is called a hair brush' so the child learns to match the object with the name of the object. It is once the object has a name, and it is reinforced sufficiently, and so learnt, that the name becomes a label in the child's mind (lesson 2h).

The problem is that we accept and so expect that children will pick-up these names, so they are not commonly taught them explicitly.

Many children with CVI do not pick-up these names, or they pick up the wrong names for things. So when looking at the above pictures, they may correctly pick out the hair-brush, not because they recognise it, but because they know the other two, and get to the correct answer by a process of elimination. So unless they are taught the names of things well, learning can be hit or miss.

A simple object with a single purpose and simple name like a hairbrush may be easy to learn, but it needs to be taught. More difficult recognition tasks for those with CVI include recognising:

And so we have a third really important way CVI affects recognition, which is:

3. Not Seen AND Not Known

This is why many with CVI don't learn. They can't tell you - what is there to tell about something unseen and unknown? It is the responsibility of those around the person to figure out:

And make the changes needed to help them learn. 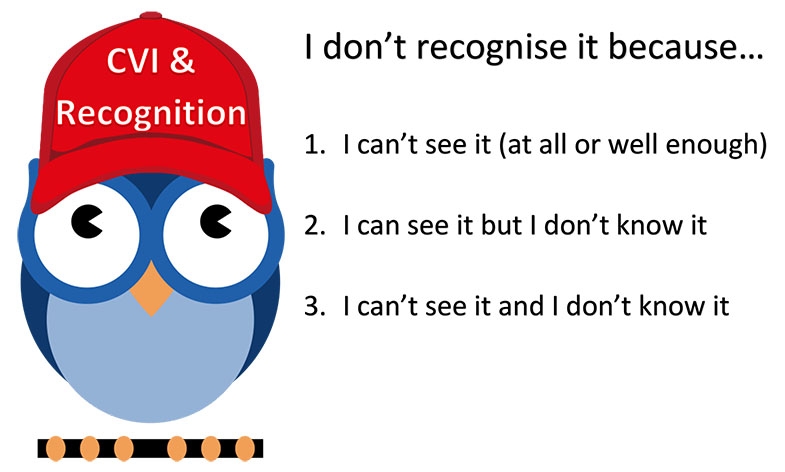 In the following lessons on CVI and Recognition we are going to look at these areas:

Before moving on please check you have understood the following:

Further reading is not necessary to move on, but if interested you may enjoy the following:

COOL Games, information and free games to teach the concept and names of colours, and object naming games.

Developmental Dyslexia Paper - explaining why dyslexia is not considered a CVI, even though CVI can affect reading and writing.