New discovery about how the eyes are affected by brain injury could lead to simple non-invasive eye test to detect CVI.

This important paper looks at how injury to the brain may be detected by looking very carefully at the eyes. The researchers have found out how the eyes have been affected in a group of young adults with very early brain injury causing lower visual field impairment.

The relationship between OVI and CVI

The relationship between OVI and CVI is not 'them and us' though, partly because many people have both CVI and OVI, but also because the two are connected. This connection however is not a simple straight line from one to the other. The OVIs and CVIs are more like living in a neighbourhood, connected by shared pathways, drives and roads. 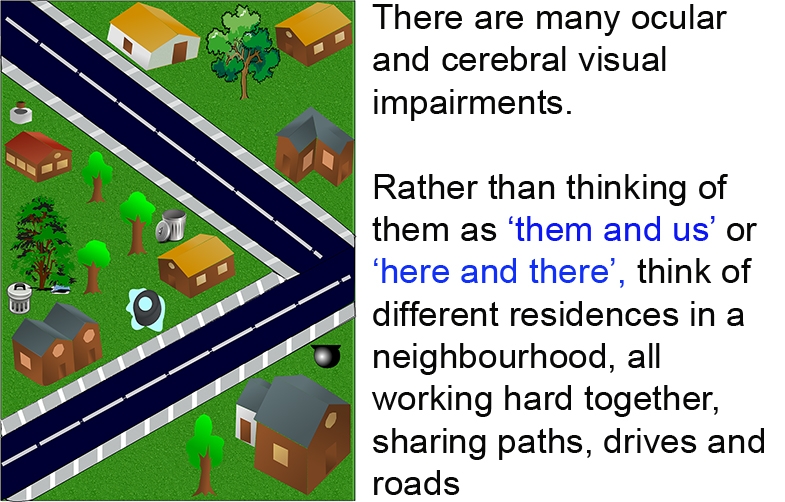 This paper looks at the whole process, from the eye, to the primary visual cortex in occipital lobes in the brain (known as the area V1 in the brain) and reaches some fascinating and extremely important conclusions.

This paper is written with the expectation that the reader has an understanding of how vision is processed both in the eye and brain.

Below is a very simple explanation; there are many resources on the internet with more comprehensive and detailed explanations, including on the Scottish Sensory Centre website, click here for link to resource.

You may have heard the expression 'scratched cornea'. Your cornea is the clear transparent part at the front of your eye that serves two purposes, one to protect, and the other to start to focus the incoming light. Imagine what you are looking at, what is happening is that your cornea bends the incoming light, and directs it through your pupil to a lens behind the pupil. This focuses the light further, onto the back of your eye, to create a picture on the lining at the back (the retina), of what you are looking at.

The fovea is the central part of the retina. This is the part of the eye where the fine visual details of what you are directly looking at are created, so that you can see colours distinctly and can see things clearly, even if they are very small. Just like a video camera, the whole retina converts the picture into electrical signals, and sends this visual information to the occipital lobes (see Eye to Visual Brain, below).

These are the eye structures discussed in this paper. 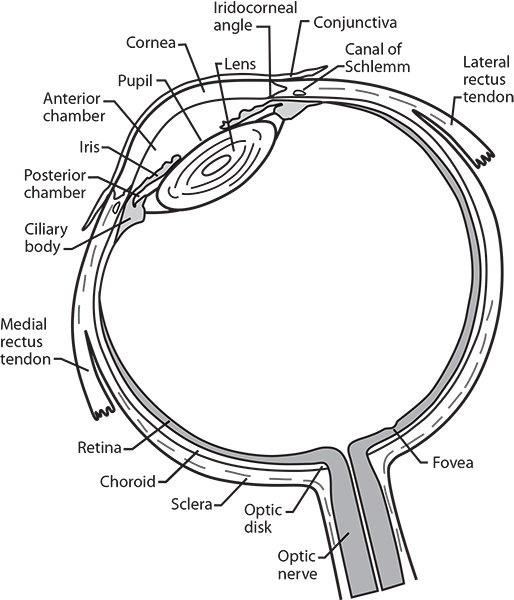 At the end of each optic tract, on both sides, is a relay station inside the brain called the lateral geniculate body, and here the visual information is relayed into the optic radiations, that take the visual image information to the occipital lobes, which assemble the image of what you are looking at, all so quickly that you are unaware the process is even taking place. 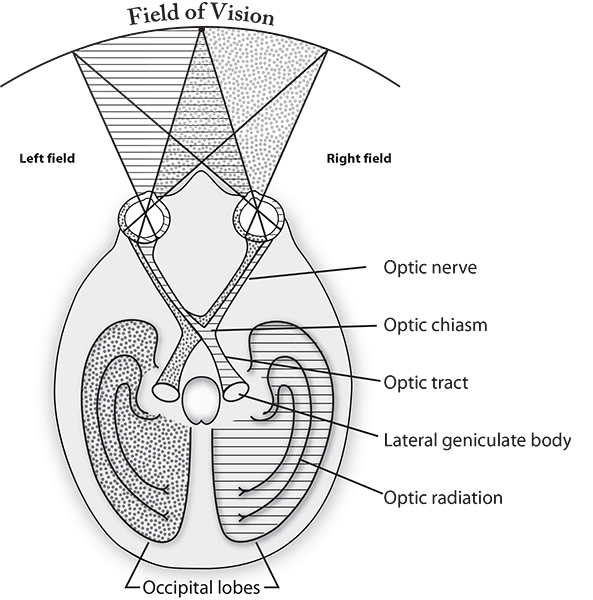 If the left occipital lobe is injured, the area to the right is not seen, and if the right occipital lobe is injured the area to the left is not seen. Similarly, the upper optic radiations can be injured (for example following damage to the white matter that sometimes affects prematurely born children). This causes lack of vision down below, which is very similar in each eye. We know this as a lower visual field impairment, which we know is common in those who also have dorsal stream dysfunctions, and Balint Syndrome. 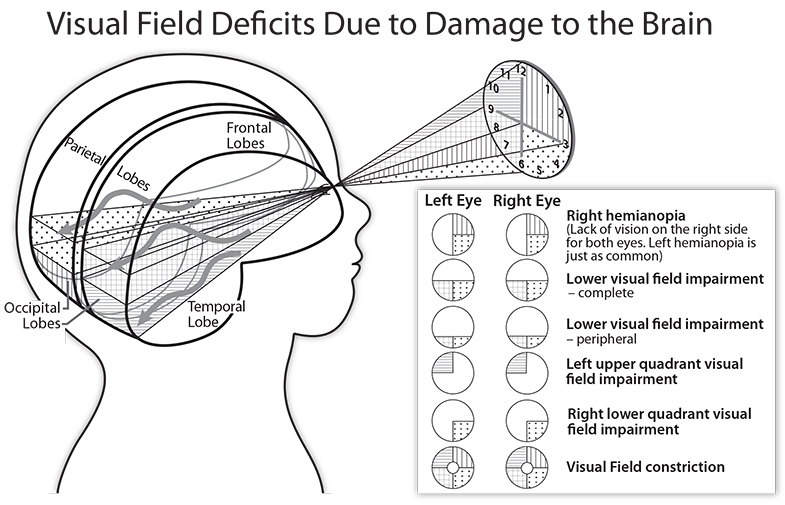 This paper uses the term 'immature optic radiation'. Immature means young or not fully formed, because the people in this study were all born prematurely (although are now adults).

The human brain is typically made up of grey and white matter. The grey matter is on the outside, the white matter on the inside.

The term lesion in this paper refers to a focus of brain tissue injury.

There are different causes of WMDI. It can happen while the foetus is in the womb, or after the baby is born. The most common form of WMDI is a condition called periventricular leukomalacia.

A common feature of WMDI is lower visual field impairment, caused by damage to the upper (superior) optic radiations.

This study uses two different types of test, one an MRI, the other an imaging test called optical coherence tomography (OCT). OCT is a harmless test, using light waves, but provides images of the 3D structure of the retina at a much higher resolution than MRI. Using OCT, the different layers of the retina can be clearly seen.

This research group had found in a previous study that young adults who were born prematurely, who had both a lower visual field impairment and WMDI, also had a thinner (than typical) retinal nerve fibre layer. The thinner retinal nerve fibre layer was considered the secondary outcome of the brain ijury. The primary (main) cause being damage to the upper optic radiations, running through the posterior parietal lobes on their way to the occipital lobes.

This study uses OCT technology to measure the thickness of each layer of the retina, focussing on the macular ganglion cell layer, to see if it is atypical in any way in those born prematurely, who have WMDI and a lower visual field impairment in each eye.

The first challenge was to recruit participants, and of thirty who met the criteria, only eight were asked, because the other twenty two would not have had the 'ability to cope with the demanding MRI examination'.

Anyone who has had an MRI scan will know that they can be stressful, because the patient is in a confined space, must stay very still, and it is VERY LOUD! More profoundly affected children may need to have a general anaesthetic to have an MRI.

It is normal for studies such as this, to match the patients, one to one, with 'typical' individuals who are similar in age and sex, so that comparisons can be made and measured if possible. This group of people who are matched by age and sex are called the control group.

In total seven patients participated, all were known to have WMDI, but are now adults. None of the seven patients had a history of damage to the structure of their eyes due to their prematurity.

The optic radiations were measured for each participant, and good results were achieved.

The researchers mapped the V1 area of the brain on all the study participants - to do this they used tests covering one eye at a time, and looked at the corresponding area of brain activity, and from this could map the primary visual cortex in the occipital lobe (V1) on each side. This area was typical for all participants, both patients and the control group. V1 includes the outer grey matter / inner white matter areas of the brain.

Once V1 had been identified for each patient, the borders between the dorsal and ventral parts were also defined as the boundary.

These images are of a typical brain.

In the other images, the tract of the optic radiation has been coloured:

The participants also undertook visual field tests, and their visual fields were plotted graphically. Using OCT they each had the thickness of their macular ganglion cell layer measured (this measurement was part of an equation, used to calculate a ratio which could be used as a more accurate measurement for comparison purposes).

The patient group had thinner macular ganglion cell layers in the upper retina than the control group.

These images are fascinating!

There are three rows of pictures for three patients A, B & C.

Looking at all the images on the right it is easy to see that patient C is much less affected, by both visual field loss and thinning of the macular ganglion cell layer.

Look at the images on far the left. With patient C, the pink and turquoise are very clearly defined. Now look at A and B, the pink has sort of been absorbed by the turquoise.

What does this all mean?

This paper raises many questions:

Why is this important to us:

The CVIs and OVIs may affect each other in ways we are only just finding out about. This is a young subject, and when we learn something new, we have to go back over what we thought we knew, and see where revisions to our knowledge are needed.