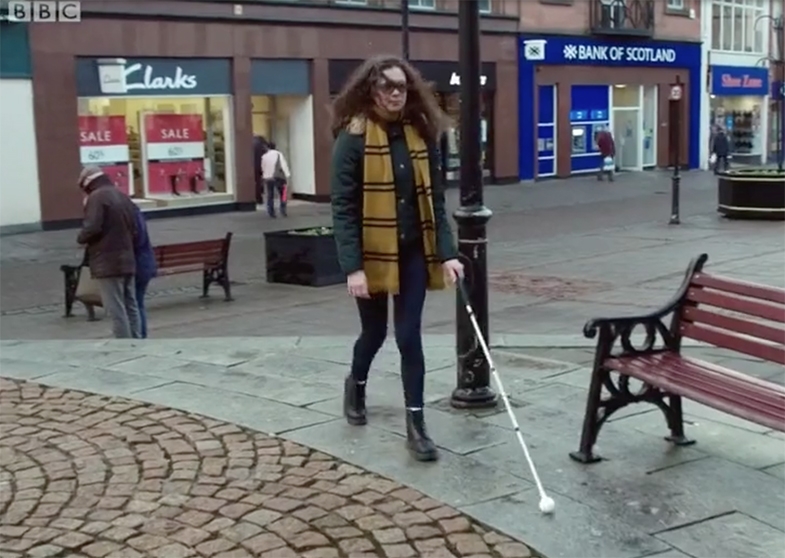 The white cane is a sign of a visual impairment, and is typically issued to people who are blind or partially sighted.

Qualifying as blind or partially sighted in most countries is still considered only in terms of reduced clarity of vision and / or visual field loss.

What about the type of CVI in which the person has no, or minimal visual field impairment, and has typical visual acuity? Many people with CVI like this do not meet the statutory criteria for being registered partially sighted or blind.

Below is a short case study of Ashleigh, who has no detectable visual field impairment and typical visual acuity, but is profoundly visually impaired due to the type of CVI caused by dorsal stream dysfunction. There are links at the end for a further explanation.

Like others with her type of vision, Ashleigh describes circumstances in which her visual world can change in a moment from seeing reasonably well, to one of seeing and hearing very little.

Ashleigh featured in the BBC Documentary Not In Plain Sight, and the excerpts on this page are taken from that documentary. Link to the full documentary at the end of this page.

We meet Ashleigh as a child

We just thought she was clumsy

Age seven Ashleigh was diagnosed with Asperger Syndrome, but...

She was still tripping up over everything, couldn't find anything

Age ten, Ashleigh was diagnosed with CVI. This next clip is from a clinic visit. Before pressing play, look at Ashleigh's hand in the image. Her open (splayed) hand when reaching shows a wide 'in-flight gap', explained in our Lesson 3f. It is an indication of inaccurate visual guidance of reach (called optic ataxia, Lesson 7b). We reach, not just with our hands and arms, but our whole bodies can be involved as we move.

Ashleigh, now a young adult, is receiving white cane training. She says it has made her 'more independent and more sociable'.

I think if they'd diagnosed the vision first, I wouldn't have been diagnosed with Aspergers...I think they would have just put it down to CVI

Ashleigh and her mother are part of our team, who help us understand CVI better. We asked Ashleigh how her cane helps her, and she said the space people give you, because you're carrying a cane is enormously helpful, and this makes things like going to the supermarket easier and more enjoyable. Now she has her white cane she no longer is frequently tripping over things, nor bumping into things.

When asked if there were any downsides, she explained that people stare, maybe because she does not look like a typical white cane user, but her advice to other people with CVI was simple

Don't care what other people think, ignore them and be confident.

Ashleigh was one of our volunteers who contributed to this work, and confirmed that the emulation of vision created is close to her own experience.University of St AndrewsVideo Link: https://vimeo.com/384014482

Fascinating documentary, only 26 minutes long and a great introduction into understanding the world of people living with CVI.BBC Scotland Documentary Not In Plain SightVideo Link: https://vimeo.com/319804738