One Thing At A Time

The challenges of CVI are sometimes described as only being able to see one thing at a time. What we are increasingly learning is that for many, this is not limited to what is seen, but also extends to sounds.

We have edited a short video (17 seconds) to highlight what may be some of the challenges faced by those who experience their world one thing at a time.

When looking at the film below (it has no sound), how do you imagine the person is feeling?

This film has no volume and one person, although it is obvious that they are talking to someone.

Interpreting the mood of the person is nearly all visual:

90% or more of an emotional message is non-verbal.

Interpreting the emotional message is one thing, and quite a big complex thing. It requires a library in your mind of visual emotional memories to match it against. The emotional messages in real life aren't pictures, they don't stay still, they are conveyed through how we communicate.

This film is not 'one thing' though, even with one person and no volume. Separate to interpreting the emotional signals, is recognising who it is. Is it someone you know? If so, from where?

Let's bring in the second person, but still with the sound off...

A conversation with two people or more is very common. Think of your conversations with people today, the ease of going from one person to the other, listening, observing, understanding, reacting as appropriate. This involves multiple parallel processes all working simultaneously.

Simultaneous
If a person can't do those things simultaneously, because they are unaware (agnostic) of the multiple things going on, then they may have simultanagnosia, or simultanagnostic vision.

Has your view of how the first person was feeling altered, now you have seen the second person in the conversation? It makes more sense when you see them both together. What about people with the common CVI called simultanagnostic vision, who can only see one thing at a time? How do they get to understand the fuller context of the conversation if they can only ever see one person at a time?

Look at the expressions, and use of body language. What if you only got little snap shots to work out how they were feeling, rather than the context of the full exchange?

They turn to face different directions, as happens when conversations have more than two people. One is chewing gum, again, real life.

Let us bring in the sound (clip below) - but read the note first, as it might not sound as you expect...

Sound Note:
You will probably have difficulty making out what is being said over the sound of the wind.

When filming, even though a windy day, the people including the person filming could all hear each other clearly and did not need to raise their voices.

The reason the people could hear each other is because sound is mapped in the brain, and given attention, a bit like an internal graphic equalised, zoning out what is not important and focusing on what is important. That is how people who live near noisy roads or on flight paths, over time, don't notice the noise, yet their visitors may find it overwhelming. It is all part of a calibration process (see Calibration link).

We know that the calibration process is not always as effective for people with CVI, and sounds calibration can be a particular problem.

Do not assume people with CVI hear as you do. One good tip is to record somewhere, as we have here, and listen to it again somewhere quiet, and consider the sounds you can hear on the recording that may appear louder, or that you didn't hear at all. The wind on the clip below sounds much louder on the film, than it did when filming.

You may have made out a few words of the conversation. If you were there, it is likely you would have heard much more clearly because your brain would have directed your auditory attention on the conversation and away from the wind. This would not necessarily be the case for the person with CVI who experiences things one thing at a time. The wind may have been completely overwhelming.

Do you see how difficult it is? This is not a complex crowded situation; there are only two people, it is clutter free, they are not moving, yet to understand fully the conversation, even if it was not windy, is still probably beyond the capacity of many with CVI.

So now we know what they were talking about, they were trying to arrange a time to meet up. Would the person with CVI have understood that?

Here's the full clip with volume and the subtitles together:

One Thing At A Time

Let us think of the life of the person who experiences only one thing at a time, and how they make sense of the emotional language needed to learn how people feel, needed for friendships (Theory of Mind link below) and all relationships through life.

With CVI we can try to make life as optimal as possible, but if something as simple as a short exchange on a windy day with more than one person is too much, then we need to think what else we can do.

What Is CVI? Emotions
Learning Emotions with CVI (inc Theory of Mind)

Filmed at the University of St Andrews, Scotland. Thank you to our volunteers. 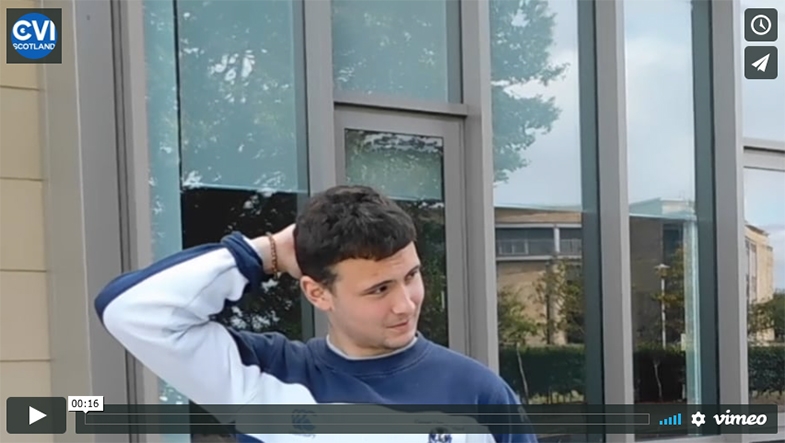