Below is a list of names of events causing brain injury or brain function abnormalities, that can lead to cerebral visual impairments (CVIs). It is estimated that 40% of the brain across many different brain areas, is dedicated to visual processing, so many brain altering events could potentially impact on a part of the brain responsible for visual processing.

We have not listed every possible brain event that can cause brain related visual processing difficulties, as the list would be enormous. For more information, an internet search will show many further on-line resources.

Please also see Lessons Level 1 where we introduce the main areas of the visual brain. 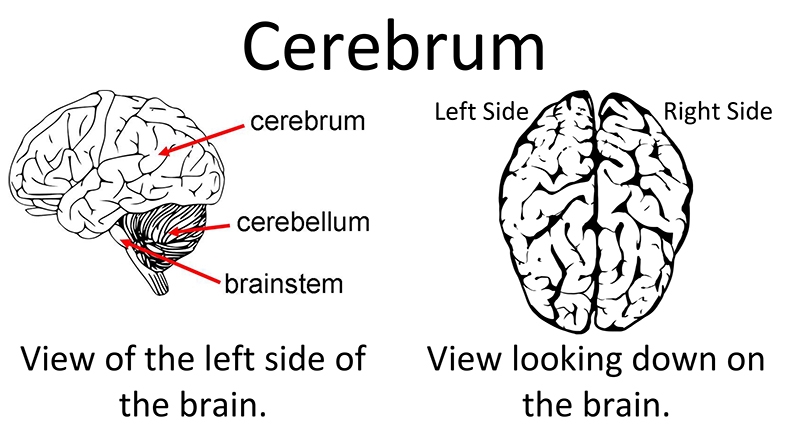 Two different views of the cerebrum, one of the left side of the brain, also showing the cerebellum and brainstem. The other as it appears when looking down from above.

The brain needs oxygen to survive. Oxygen travels in the blood. The oxygen rich blood created in the heart travels to the brain in arteries. If the wall of the artery in the brain becomes weak, this can create a bulge, which can be extremely dangerous if it bursts, when it can cause severe brain injury.

The term dementia refers to an ongoing and developing loss of brain function, particularly around memory, but also problem solving and planning, and can result in confusion. There are a number of different causes, most commonly Alzheimer's Disease and vascular dementia.

For more information, please see our page on dementia.

Epilepsy is a brain condition that causes seizures. Some children with CVI also have epilepsy, and the management of their epilepsy can impact on the severity of their CVI. Prolonged epileptic seizures can impair brain function.

The term 'genetic' covers a vast number of conditions that relate to the genes.

At the point of conception, the egg from the mother and sperm from the father join. The egg and sperm each carry 23 chromosomes, numbered 1-22 plus either an X or Y chromosome. So that very first cell, created at that point, carries a complete set of chromosomes from the mother and father totalling 46 chromosomes, comprising two sets of 1-22 plus one pair of sex (X and Y) chromosomes. That first cell divides repeatedly, to create the developing foetus. Within those 46 chromosomes are genes, how many is open to debate but the Human Genome Project estimated between 20,000-25,000. The genes are like little units of instructions to build every part of a human being. The genes and chromosomes can be atypical in many different ways, either from that point of conception, or can be altered later in life. Atypical genetics can affect any part of a person, including the brain development of the foetus.

The big bit of the brain that looks a bit like a walnut is called the cerebrum, see diagram at top of page. The outer layer of the cerebrum is called the cortex and is made of tissue called grey matter, as it is darker than the white matter underneath (Lesson 1a). Inside the white matter are water spaces where cerebro spinal fluid is made and contained. These spaces are called ventricles. With hydrocephalus, the volume of cerebrospinal fluid in these spaces is increased, which can create increased pressure inside the skull, and lead to damage of the brain. Hydrocephalus can be present from birth, or can develop in childhood or adults, normally after an illness or injury.

Glycaemia means sweet / sugar (glyc) of the blood (aemia). The sugar in the blood is called glucose.

Glucose is the fuel for your brain. If the amount of sugar in the blood goes below a certain level, it can affect the brain. Severe hypoglycaemia can mean nerve cells in the brain called neurons, which transmit information, are damaged or destroyed. Rather than starve the brain of fuel, when hypoglycaemic, the neurons are actually attacked.

Hypoglycaemia is most commonly associated with diabetes. Some babies are born with hypoglycaemia, and children and adults can become hypoglycaemic for many different reasons.

Encephalopathy refers to a disease that alters the brain.

The brain needs oxygen. Oxygen travels in the blood. If the flow of blood to the brain is limited or prevented, this starves the brain of oxygen and can cause a brain injury.

The term hypoxic-ischaemic encephalopathy relates to lack of oxygen supply and / or blood supply to the brain of a foetus or infant, most commonly, during the process of birth. There are many different causes.

Meningitis occurs when the thin layers surrounding the brain become inflamed due to infection.

Your central nervous system consists mostly of your brain and spinal cord. The nerves in the central nervous system are protected by a substance called myelin, which ensures the nerve fibres function well and the messages from the brain to the rest of the body that control movement run smoothly. With multiple sclerosis, the myelin is mistaken for a foreign body, and the immune system fights it, thinking it is fighting off an infection. This damage can leave scars in the brain, resulting in physical disabilities around movement, and where the actual nerves are damaged too, affecting brain function.

PVLM is most common in babies who are born prematurely or have a low birth weight.

The brain needs oxygen to survive. Oxygen travels in the blood. The oxygen-rich blood created in the heart travels to the brain in arteries. If one of the arteries that feeds the brain becomes blocked, for example by a clot of blood, then that part of the brain is starved of oxygen and can be damaged. This is a stroke, specifically an ischemic stroke. Ischemic means restriction of blood flow. Another type of stroke happens when the artery breaks, leaking blood which can both damage the brain cells, and also reduce the blood flow to certain areas, meaning oxygen in reduced, starving areas of the brain of oxygen, causing further possible damage. This type of stroke is called a haemorrhage, and is different from a cerebral aneurysm, see Aneurysm above.

While strokes are most common in older people, the average age is around 70, children can suffer strokes. A stroke can also occur in a developing foetus.

Whilst in the womb, the developing foetus receives its nutrients and oxygen through the placenta. Toxins including alcohol, drugs, some medications and other toxins found in certain foods have been shown to affect the developing foetus. This can lead to premature birth, see PVLM above.

Many children do not have a diagnosis, meaning difficulties cannot be attributed to a known condition, event or injury. In many cases, the cause of difficulties is believed to be an unidentified genetic cause. From UK charity Syndromes Without A Name (SWAN) "It is thought that about half (50%) of children with learning disabilities and approximately 60% of children with congenital disabilities (disabilities which are apparent from birth) do not have a definitive diagnosis to explain the cause of their difficulties." We suspect separately that between a quarter and a half of children in special education schools may have visual perception difficulties associated with CVI, so this group is likely to constitute a significant percentage of cases of CVI in children, if not the largest single group. If not having an underling diagnosis is challenged when seeking a CVI assessment or diagnosis, you may want to share these findings. Our advisors note several cases where they have confidently diagnosed CVI for a child without a known underlying medical condition. The CVI diagnosis was based on the outcome of structured questions, and if known, the location of a brain abnormality (see Brain Locations). In some cases, the child has later received a diagnosis for the underlying medical condition, which is usually genetic (see above) in origin. 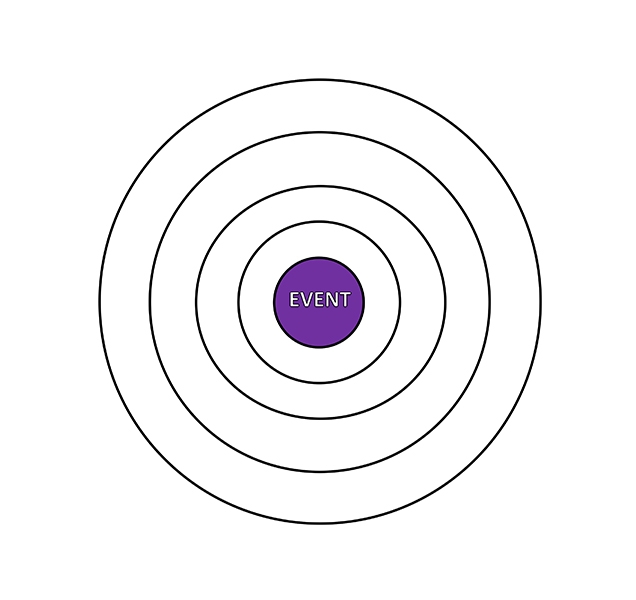