This paper looks at whether some elements of autism in children may be due to a cerebral visual impairment with optic ataxia.

What Is Autism?
Huge amounts have been written on autism or autism spectrum disorder (ASD). In this paper it is defined as:

"...a behaviourally defined neurodevelopmental condition with core deficits of severe impairment of reciprocal social interaction, communication and imagination, together with repetitive and inflexible behaviours"

What Is CVI?
We have written quite a lot to address the question What Is CVI?. The definition currently used in most medical and academic literature is:

CVI is a verifiable visual dysfunction which cannot be attributed to disorders of the anterior visual pathways or any potentially co-occurring ocular impairment.

Sensitivities
This paper shows that some children with autism have CVI, including a confirmatory medical diagnosis, but this issue can be a little sensitive for two reasons:

This paper is looking at one part of CVI and one part of autism, around the area of motor skills.

Motor Skills / Motor Impairment
Your motor skills relate to your ability to do things physically, like walk, run, ride a bike, hold a pen, use a knife and fork etc.

Where motor skills do not develop typically, the child is not at the same level as other children of the same age in relation to gross and / or fine motor skills, it is called a motor impairment.

The first thing to check when a child's motor skills are not developing typically is that there are no problems relating to their muscles or other physiological causes. Another cause may be a visual impairment from their eyes, where something is not seen clearly enough, and the child may need spectacles for example. If these are all checked and ruled out or accommodated, then the cause is considered to be neurological, or from the brain.

Motor impairment is a common feature of autism. One of the indicators is a child not being able to use a pen effectively, and struggling to eating with a knife and fork. One of the tests that is used to measure motor skills is called the Beery VMI test. VMI stands for Visual Motor Integration. The child is asked to copy symbols, starting with very simple ones like a line or circle. Then the test gradually becomes more complex. Using the Beery VMI test, the child is given a score, to see if their motor skills are within the normal range for their age, or are impaired. An internet search of 'Beery VMI' will give much more information and images of the test. 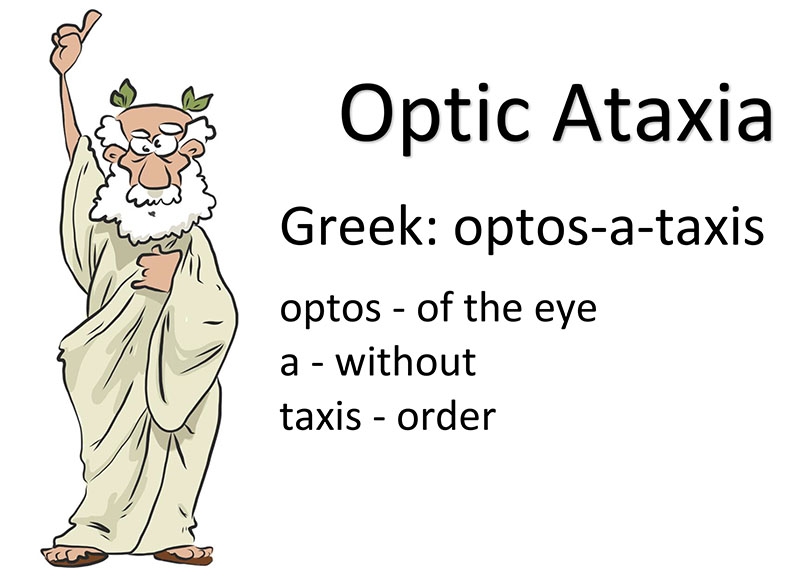 Taken from Lesson 7b Optic Ataxia

We reach for things with our whole bodies, not just our hands. As we walk, maybe to cross a street, we are reaching for our destination using our whole body, particularly our legs and feet. If visually reaching for things is not so accurate, it can look a lot like a motor impairment.

Motor Impairment v Optic Ataxia - What's The Difference?
This question is a fundamental part of the paper, particularly in children identified as autistic.

Dr Hay is an expert in CVI, and featured on the BBC Documentary Not In Plain Sight, link below.

Dr Hay had diagnosed CVI in a lot of children, many with optic ataxia, and was repeatedly seeing something remarkably similar in children with autism.

One of the tools used to characterise CVI by Dr Hay is the CVI Inventory. The CVI Inventory is a validated set of 51 questions designed to identify behaviours typical of CVI, not just generally but seek evidence for the specific CVIs the child may be affected by. The CVI Inventory, like the Beery VMI test, gives the child a score, abbreviated to the CVIS in the paper. These scores provide a basis to analyse the findings, which is a critical part of medical research.

Grasping
The CVI Inventory is just one tool to diagnose CVI, and an experienced doctor will consider a range of factors and issues, including if there is any damage to the brain or known event associated with CVI. We explained this in our pages The CVI Puzzle.

How a person reaches out and grasps something can be an indicator of optic ataxia, as explained in this short video.

The two videos below, each only a few seconds long, are from current clinical work, showing the impaired visual guidance of reach in patients with autism and motor impairments. 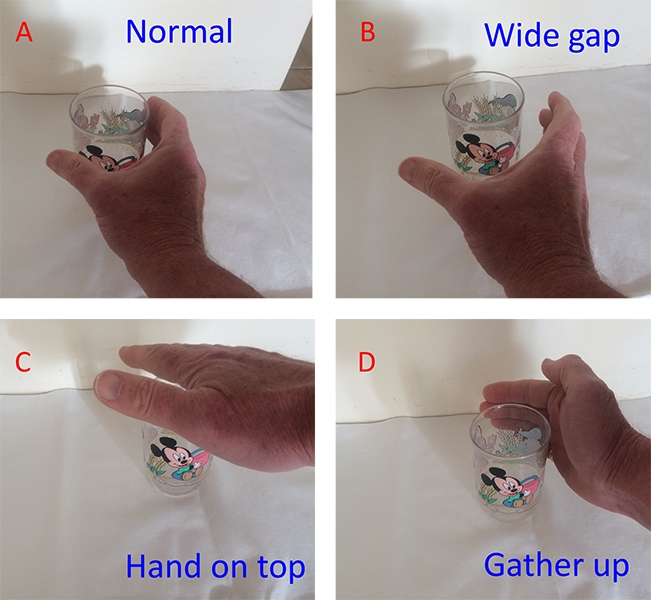 How a child reaches and grasps can be a very useful indicator of visual inaccurate guidance of reach, called optic ataxia.

Dr Hay considered whether there may be a measured way of assessing how a child grasps things, based on the position of their hands, time taken and accuracy. To measure impairments, there needs to be an accepted level that is considered 'normal', called a normative data range. A previous study showed that typically developing children accurately grasp objects by 4 years.

The Study
The study considered the theory that the cause of the autistic children's motor impairments was optic ataxia.

To test the theory, previous cases were reviewed, that is why this research is a case series.

These 28 children were all from mainstream schools, they had an autism diagnosis but not learning difficulties, so were considered age typical in term of their academic abilities.

All 28 were identified as having dorsal visual stream dysfunction, but to confirm this a medical diagnosis was required.

The first 16 (of the 28) identified were offered a full neuro-ophthalmic assessment. 13 accepted and underwent extensive testing and assessment, confirming dorsal visual stream dysfunction.

This means that all thirteen out of thirteen had CVI, confirmed with medical diagnosis.

That in itself is significant, and suggests all children with autism and a motor impairment as part of their spectrum of difficulties, should be assessed for evidence of CVI.

The research went on to consider the merit of using how a child reaches and grasps as part of a diagnostic tool-kit. There are many images and links to video recordings. The benefit is that this approach is very simple, and from this study, would seem very effective.

What the study is not suggesting is that observing grasping is enough for a CVI diagnosis.

What this very simple test could be useful for is identifying children with autism who may benefit from further assessment, to see if they have CVI, and if they do, enable their support to be more targeted.

Limits of the Study
The sample size was small, and more research is required to further validate these findings.

The Paper
The paper covers a range of testing including neuro-ophthalmic, cognitive and for motor skills, and the detail and scores and analysis can make it a little tricky to read in parts if you are unfamiliar with the different tests. All of the terms are explained well, and it is definitely worth reading, because the findings, whilst needing more research, are both compelling and fascinating.

The paper is behind a paywall, and the link will give you access to highlights and the abstract. 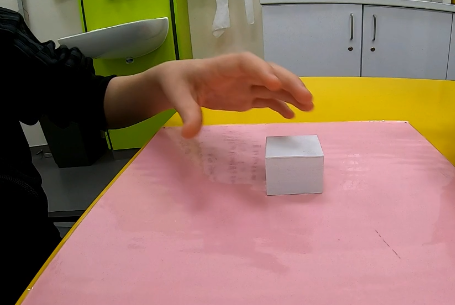 Click here to view source of CVI definition quoted at top of this page.