What is perceptual visual dysfunction?

What you can see right now has been created by multiple brain processes, brought together in time and space, so that what is in front of you and around you makes sense, because you:

It is estimated that 40% of the brain is given to this visual processing.

These three processes relate to different parts of the brain: 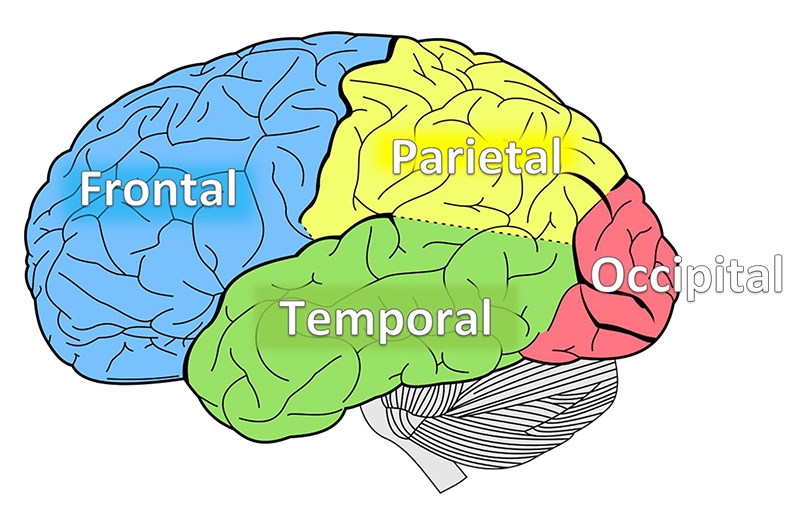 Image showing the left side of the brain with the named lobes coloured blue, green, yellow and red.

The posterior parietal lobes process the scene, to let you know where things are in relation to where you are. When they are not working so well, this can be called dorsal stream dysfunction.

The temporal lobe processes let you know what you are looking at, so you can recognise things, when not working so well, this can be called ventral stream dysfunction.

The dorsal stream is a pathway in the brain between the occipital lobes and the back of the parietal lobes (the posterior parietal lobes) on each side.

The ventral stream is a pathway in the brain that travels between the occipital lobes and the temporal lobes, on each side. 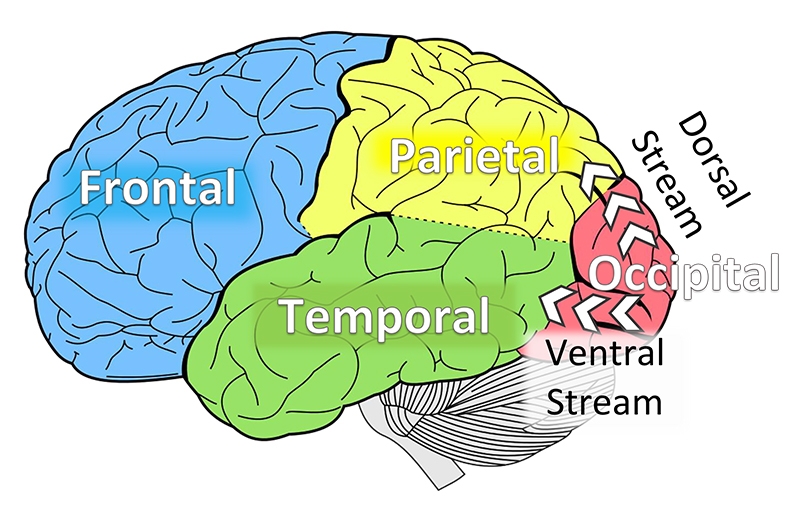 Image of the left side of the brain showing the different lobes with white arrows showing the direction of the dorsal and ventral streams.

These rapid synchronised brain processes follow a process. This process is illustrated by the two trees below, starting with the eyes at the bottom. One is simple, the other more detailed: 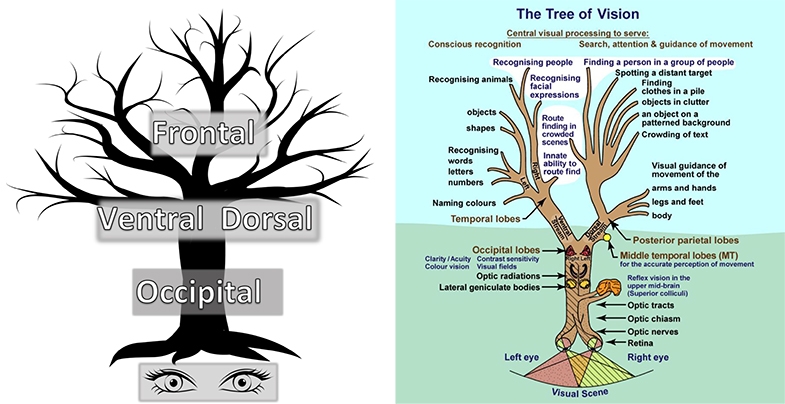 The perceptual visual dysfunctions relate to conditions affecting the dorsal and ventral stream. 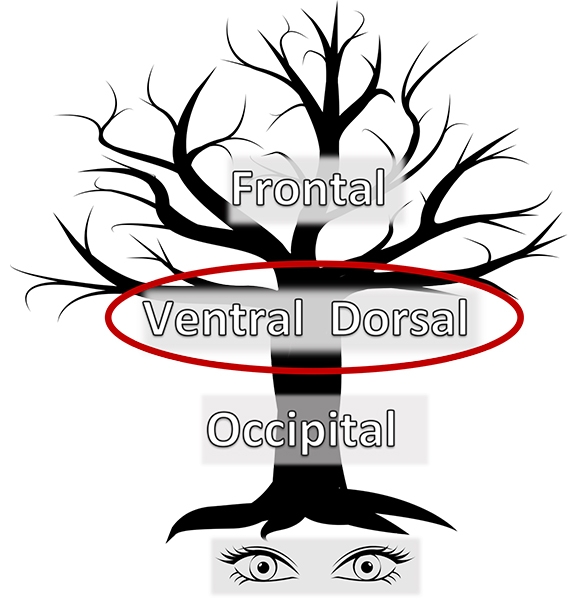 The perceptual visual dysfunctions relate to conditions affecting the dorsal and ventral streams.

These are sometimes called higher processing visual disorders, because they are 'higher up' in the process, as you can see from the above tree diagram. 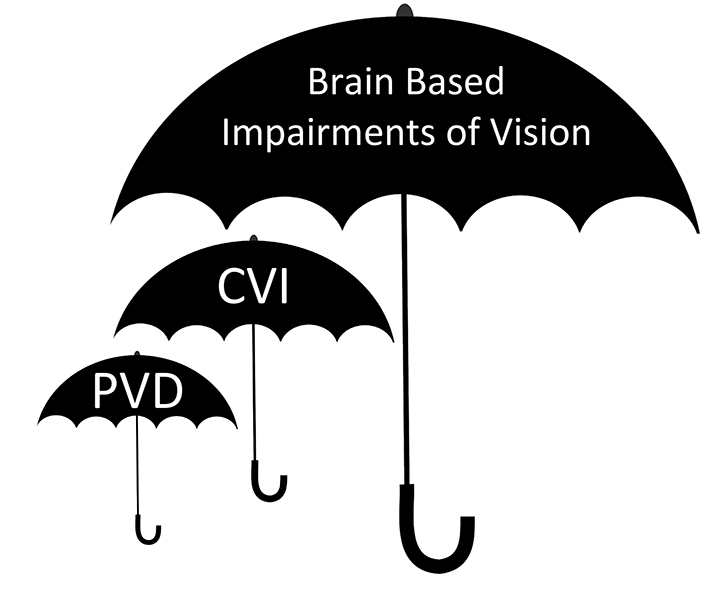 This paper is not about:

This paper is not about the initial visual processes that create the picture you see, so it is not about:

But why? These are the areas commonly associated with cerebral visual impairments.

The reason is a growing base of research is showing that the biggest group of children affected by CVI are likely to have near typical visual acuity, contrast vision and visual fields, yet have perceptual visual dysfunction leading to learning difficulties, but this is not detected by standard sight tests, so can be tricky to pick up.

What are the risk factors for this group of children?

Based on this information, the Government of India has taken a proactive approach and has developed a number of centres around the nation, to check the children in these groups, to:

...ensure early diagnosis and intervention for children with brain injury.

This makes sense. It is widely agreed that the sooner a child with any sort of visual impairment, from the eyes or brain or both, gets the right support, the better. But that support needs to be based on the correct identification of the visual impairments. Generic support for children with visual impairments is going to at best be limited, and could contribute to learning difficulties, meaning that for some children, the support, if not correctly matched to the visual impairments, can lead to disabilities.

The problem with perceptual visual dysfunction is that is can look like a lot of other things.

This paper explains many different approaches to identify the presence of perceptual visual dysfunction, including

Others with Undiagnosed Perceptual Visual Dysfunction
We have featured the findings of the CVI Project showing it is likely that at least one child in every mainstream school class is struggling with learning due to undiagnosed visual perception difficulties, most due to perceptual visual dysfunction.

India is the first country we are aware of, to create a national system to plan to check certain high risk groups of children for perceptual visual dysfunction, which is an enormous commitment, but is likely to reap rewards. At the time of printing, 92 early intervention centres have opened, and a further 366 have been approved. The children identified as having visual perceptual difficulties are however likely to be just the 'tip of the iceberg', and we need to think about the others too.

This paper features a shorter question inventory, of just eleven questions, to help separate children whose difficulties are due to perceptual visual dysfunction, and those for whom there may be other causes, to ensure the support is as good as it can be.

The diagnostic process is expensive, and it is likely not a viable option for the vast numbers of children affected around the world, so a double approach, of targeting the most at risk children whilst having a system of identification and support for those less at risk, may be the way forward.

Non Verbal Children
There is another group of children who are non-verbal, yet many of the tests are aimed at those who have sufficient language abilities to follow simple instructions. Of these children in special schools, as many as a half may have undiagnosed perceptual visual dysfunction (click here for references). We all agree this is an area where work is urgently needed because identifying the dysfunctions enables optimal care and teaching.

As far as we are aware, the Indian initiative for this group of children is likely the largest worldwide, and it has been driven by many passionate people, including we know, doctors, teachers and parents.